At the last VFW meeting, over at Daylight Donuts mid-morning of the previous Saturday, the subject of a canoeing group coming down the Mississippi River was discussed.  There would be three of them to be taken care of by the Caruthersville VFW Post in four days.  I listened to the discussion and thought no more about it. 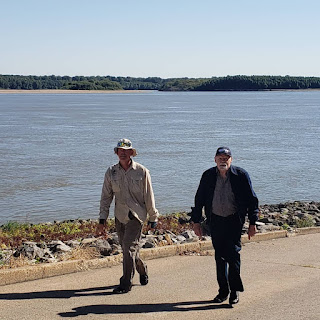 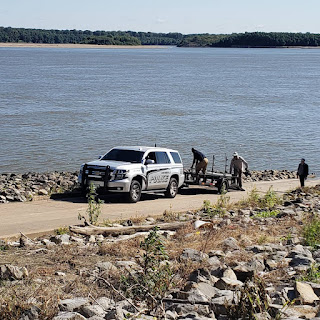 On the following Tuesday, I received a phone call asking if I could assist in getting the canoes over to the Police Department’s secured area the next morning.  I do not have a pickup, only a sedan car.  The VFW officer said he would find out if the Police Chief could have the canoes picked up.  Any equipment could stay with the canoes.  Personal supplies and items would go with the Warriors over to the Drury Inn in Hayti where the VFW had obtained rooms.  Another officer, Bill, would take them over to Walmart to re-supply, after they were checked into the hotel for the night.  However, he had to take someone to a medical appointment that morning.  I agreed to provide transportation over to the hotel.

Annie and I arrived down at Reynold’s Park at ten the next morning and waited until a little after ten when the first Warrior arrived.  He guided his canoe with the double paddle from deep water into the shallow water of the boat ramp and pulled it up from the lapping water.  After introductions, Harry and I brought his personal belongings up to the car.  I popped the trunk.  Once his items were in the trunk, he took a lookout position to spot the other two canoers coming into view upriver.  We waited for them to arrive at the boat ramp and they maneuvered their canoes as Harry had.  By the time most of the personal items were loaded, except what was going to be held on the lap, the Police Chief drove up with a long wide trailer.  Tony and the Warriors soon had their canoes ready for transport.  They could not believe the Chief himself as assisting them.  They understood when he informed them he was Army.  During all of this time, Annie had been taking photos. 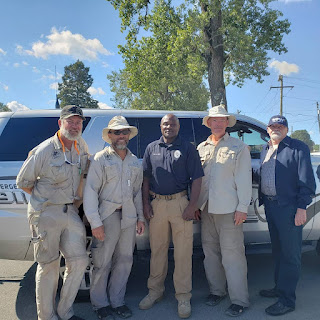 Thursday morning, Bill and I arrived at the hotel.  The troops were rested, fed and cleaned.  Their laundry was done and they were re-supplied.  Their personal items went into the bed of Bill’s pickup.  Harry rode with Bill and I drove Brian and Eric.  Chief Tony arrived with the canoes just as we pulled in and parked by the river.  The reverse order of procedure for getting the canoes loaded with the equipment and supplies and ready to be back into the water was conducted. 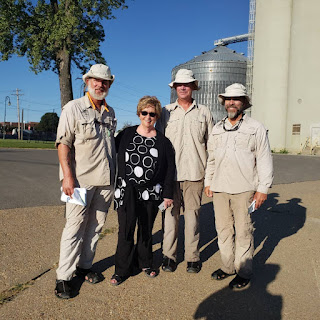 Mayor Sue Grantham and Annie arrived.  Annie began her photography.  One of the VFW officers was also on hand to take photo record keeping.  Soon the canoers were gathered for Sue to present a couple of souvenirs; each one received a color, double, tri-fold brochure of Caruthersville and a white, hand towel embroidered with “Caruthersville” and a hook on it for attaching.  They expressed their gratefulness and Annie took a photo of them and the Mayor. 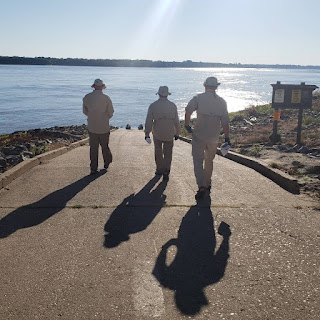 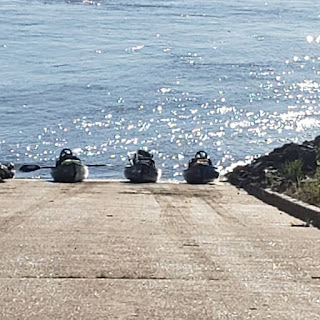 They walked down the ramp and seated themselves in their canoes.  One by one they pushed off into the lapping water and peddled out into deep water.  The sun was still rising and shined its rays onto the water just ahead for them to glide into.  Annie got some really good photos. 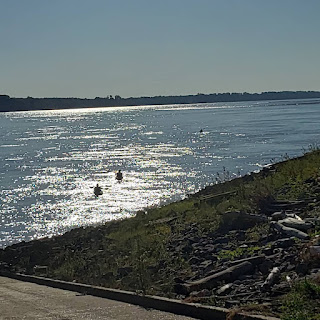 The Warriors Expedition Organization has a list of towns along the Mississippi River who support the Warrior Peddling.  For six years now, the Caruthersville VFW Post has supported Warrior combat veterans in their effort to transition back into a normal life, after learning how to live with their experiences.

Check out the website “warriorsexpeditions.org”.  Since 2015, the organization will accept forty applications from combat veterans, for Warrior Hike, Warrior Bike or Warrior Paddle, per year.  The expeditions are all across America.  One might hike the length of the Appalachian Trail or one of the other seven major trails of the United States.  The Great American Rail Trail is used as the bicycling expedition.  It runs from Washington, D.C. to Washington State, as a conservation project of converting old railways to cross-country trails.  It is only 50% plus completed.  Each year the Mississippi River is used for the paddle expedition, from Minnesota to the Gulf of Mexico.  The idea is to give the Veterans a form of therapy using an endurance challenge of nature.  It also puts them out in a team by themselves for a lengthy period of time, with the opportunity to talk of their experiences with someone who understands from their own similar experiences.  These are combat veterans from all branches of the military; both men and women.  These challenges take months and are fully funded by the organization itself.  The organization is supported by individual and business sponsorships.

Please remember these people in your prayers. Thank you and many blessings.
Thank you for Glenda's recovery
Jude's private needs
Geneva's grandson
That Kirth is cured of his cancer
That Kevin is released from his imprisonment

Annie Jeffries
I've turned my life upside down leaving California. I hope I can find a good cup of coffee.